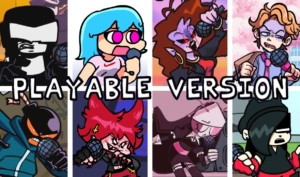 New opponents are waiting for you in this Friday Night Funkin Mod. In FNF BETADCIU [Blantados] Mod, You’ll continue your journey of winning your Girlfriend’s heart. Convince your Girlfriend’s Dad by winning the rap battle against your opponents.

A mod of Friday Night Funkin where the different characters sing (Nerves but every turn another character sings it). This is very popular mod. FNF: Nerves but Every Turn a Different Cover is Use Mod is also known as FNF BETADCIU Mod or FNF Blantados Mod. This mod is also known as Playable versionBy creating this Betadciu mod many FNF game character is used which is shown in Mod credit. FNF Blantados Mod where Blantados is mod creator so that why people also saying the FNF Blantados mod. You can download FNF Betadciu or Blantados from given below link. You can also play this Betadciu mod online by clicking play button. You can also check out our best mod FNF vs SCP ,FNF VS Fireboy & Watergirl, and Vs. Tricky Version 2.0 [Phase 3]

You have a very simple task in Friday Night Funkin FNF BETADCIU [Blantados] Mod to play when the Arrow Marks are coming from below, when the arrows are on the top arrow, then press the exact arrows.