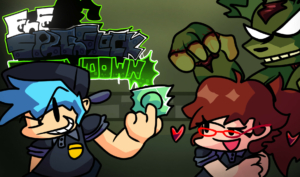 New opponents are waiting for you in this Friday Night Funkin Mod. In FNF: Springlock Showdown Mod, You’ll continue your journey of winning your Girlfriend’s heart. Convince your Girlfriend’s Dad by winning the rap battle against your opponents.

Springlock Showdown is a Friday Night Funkin mod where the Boyfriend got a job at Fazbear’s Fright in order to make some cash, maybe to buy a new microphone, but things didn’t go as planned when creepy animatronics started coming to life at night to rap-battle. You can also play [FNF] Smosh Food Battle and FNF vs Rainbow Friends

You have a very simple task in Friday Night Funkin FNF: Springlock Showdown Mod to play when the Arrow Marks are coming from below, when the arrows are on the top arrow, then press the exact arrows.