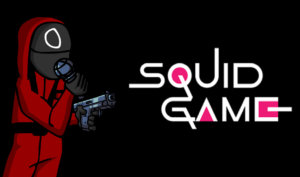 New opponents are waiting for you in this Friday Night Funkin Mod. In FNF: Squid Game 1.5 Mod, You’ll continue your journey of winning your Girlfriend’s heart. Convince your Girlfriend’s Dad by winning the rap battle against your opponents.

FNF Squid Game mod of Friday Night Funkin where the boyfriend found himself in a debt and decided to try his luck in the squid game which is very popular. If Boyfriend wins the squid game, all this debt will be paid off and win a lot of money, but the price for lost the game is very high. You can also check FNF: Distrusted vs Sans, Papyrus and Alphys and FNF vs Happy Wheels [Irresponsible Dad]

You have a very simple task in Friday Night Funkin FNF: Squid Game 1.5 Mod to play when the Arrow Marks are coming from below, when the arrows are on the top arrow, then press the exact arrows.