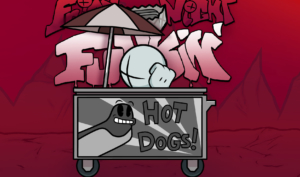 New opponents are waiting for you in this Friday Night Funkin Mod. In FNF vs Hotdog Vendor [Grunt] Mod, You’ll continue your journey of winning your Girlfriend’s heart. Convince your Girlfriend’s Dad by winning the rap battle against your opponents.

FNF vs Hotdog Vendor [Grunt] mod of Friday Night Funkin game where the Boyfriend rap-battle  Grunt from Madness Combat as he sells hotdog. this mod is also known as FNF Grunt Mod. You can also check out FNF vs Bogus and FNF Shaggy – God Eater RetroSpecter Remix.

The story of this mod is that When Boyfriend was finished rapping against Tricky, He felt hungry want to something to eat, and fast. he go for hotdog to eat, The grunt, The LEGEND himself, Hotdog Vendor from Madness Combat! He want to battle him.

You have a very simple task in Friday Night Funkin FNF vs Hotdog Vendor [Grunt] Mod to play when the Arrow Marks are coming from below, when the arrows are on the top arrow, then press the exact arrows.

The Keybaord Controls for FNF FNF vs Hotdog Vendor [Grunt] Mod are WASD or Arrow Keys.