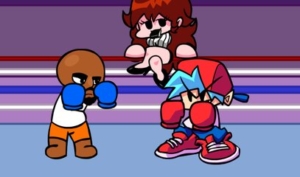 New opponents are waiting for you in this Friday Night Funkin Mod. In FNF Vs. Matt Boxing Fight Mod, You’ll continue your journey of winning your Girlfriend’s heart. Convince your Girlfriend’s Dad by winning the rap battle against your opponents.

A FNF Matt Boxing Fight mod of Friday Night Funkin that turned the very cool YouTube video into a playable Matt Mod. This mod becomes so popular after release.  In this mod it is Very hard with a new mechanics never seen before this in other mods that try to simulate the real boxing match. After this Matt Mod, everyone is waiting for version 2 and 3 of Matt boxing Mod. If you play this mod and win the mod then you will get a bonus new song. Which is very good. So you can Play Online FNF Matt Boxing Fight Mod. if you want to download then you can also download it from our site. You can also check recent popular mods FNF vs Flippy Flipped Out!, FNF: Animal BETADCIU [Blantados], and FNF BETADCIU [Blantados].

You have a very simple task in Friday Night Funkin FNF Vs. Matt Boxing Fight Mod to play when the Arrow Marks are coming from below, when the arrows are on the top arrow, then press the exact arrows.

The Keybaord Controls for FNF FNF Vs. Matt Boxing Fight Mod are WASD or Arrow Keys.