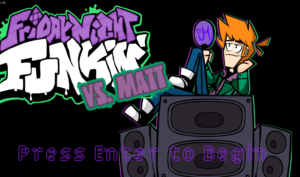 New opponents are waiting for you in this Friday Night Funkin Mod. In FNF vs Matt Eddsworld [Full Week] Mod, You’ll continue your journey of winning your Girlfriend’s heart. Convince your Girlfriend’s Dad by winning the rap battle against your opponents.

FNF vs Matt Eddsworld mod of Friday Night Funkin game where the Boyfriend challenge Matt from Eddsworld to a rap battle. This FNF Matt Eddsworld is full week mod. You can Play this Mod online by Clicking the play button. In this mod has 3 songs which is listed given below. You can also check latest mods FNF vs Eddsworld (Blantados Edition) and FNF vs Geezt [Week End]

You have a very simple task in Friday Night Funkin FNF vs Matt Eddsworld [Full Week] Mod to play when the Arrow Marks are coming from below, when the arrows are on the top arrow, then press the exact arrows.