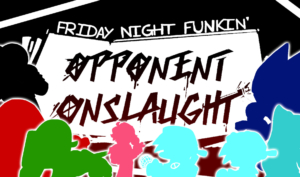 New opponents are waiting for you in this Friday Night Funkin Mod. In FNF vs Opponent Onslaught Mod, You’ll continue your journey of winning your Girlfriend’s heart. Convince your Girlfriend’s Dad by winning the rap battle against your opponents.

FNF Opponent Onslaught mod of Friday Night Funkin game where the Boyfriend rhythm-battle with some similar faces such as Whitty, Red & green color Impostor, Beepie, Senpai edition, Miku, and Majin Sonic, after a portal appears in the middle of the street. You can also play FNF: Phantasm but Old and New GF Sings it and FNF: Hill Of The Void Remake Sonic.EXE

You have a very simple task in Friday Night Funkin FNF vs Opponent Onslaught Mod to play when the Arrow Marks are coming from below, when the arrows are on the top arrow, then press the exact arrows.

The Keybaord Controls for FNF FNF vs Opponent Onslaught Mod are WASD or Arrow Keys.