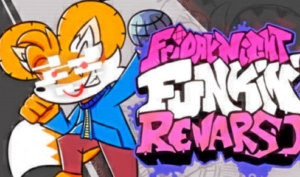 Are you ready to play the ultimate Friday Night Funkin battle? FNF vs Renarso is a new addition to FNF Mods. The playability of FNF vs Renarso Mod is good although extremely difficult in the final stages.

New opponents are waiting for you in this Friday Night Funkin Mod. In FNF vs Renarso Mod, You’ll continue your journey of winning your Girlfriend’s heart. Convince your Girlfriend’s Dad by winning the rap battle against your opponents.

A FNF Renarso mod of Friday Night Funkin is that where during a walk BoyFriend and GirlFriend meet Renarso, Renarso is a mysterious agent, who challenge you to do rap battle with him then the game is start Now you mission is to beat Renarso character of FNF Game. if you want to play vs Renarso fnf mod then you can click on play button. If you want to download this mod then click on download link which is given below. You can also checkout some best mods are FNF vs Lucky Boy, FNF Mid-Boss Matchups vs NAPSTABLOOK and FNF Sarvente’s Mid-Fight Masses.

You have a very simple task in Friday Night Funkin FNF vs Renarso Mod to play when the Arrow Marks are coming from below, when the arrows are on the top arrow, then press the exact arrows.

The Keybaord Controls for FNF FNF vs Renarso Mod are WASD or Arrow Keys.