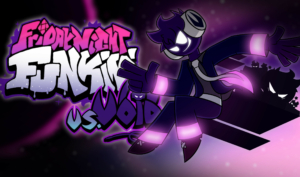 Are you ready to play the ultimate Friday Night Funkin battle? FNF vs Void is a new addition to FNF Mods. The playability of FNF vs Void Mod is good although extremely difficult in the final stages.

New opponents are waiting for you in this Friday Night Funkin Mod. In FNF vs Void Mod, You’ll continue your journey of winning your Girlfriend’s heart. Convince your Girlfriend’s Dad by winning the rap battle against your opponents.

A FNF Void mod of Friday Night Funkin is beautiful music, In this Boyfriend need a rap battle against a cosmic pop star named Void. Here bf want to beat the void character of FNF. The story of this mod is that Void, a cosmic pop star with an ego as massive as a black hole. He want to challenge to you that start a fnf rap battle. This mod has so many good music song and You can Play FNF vs Void mod online from our site. You can also check out FNF X DDLC, FNF vs Xigmund [Martian Mixtape] v2 and FNF VS Garcello Neo Remix.

You have a very simple task in Friday Night Funkin FNF vs Void Mod to play when the Arrow Marks are coming from below, when the arrows are on the top arrow, then press the exact arrows.

The Keybaord Controls for FNF FNF vs Void Mod are WASD or Arrow Keys.