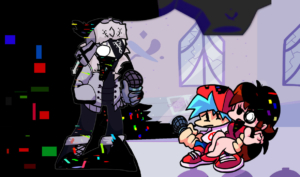 New opponents are waiting for you in this Friday Night Funkin Mod. In FNF X Pibby vs Corrupted Ruv Mod, You’ll continue your journey of winning your Girlfriend’s heart. Convince your Girlfriend’s Dad by winning the rap battle against your opponents.

FNF X Pibby vs Corrupted Ruv is a Pibby FNF mod where Ruv from the Mid-fight masses Mod got corrupted by the Pibby Virus and is singing to the tune of a glitchy remix of zavodila song called Zavoglitch. You can also play FNF Endless-Cycle but Everyone Sings it and FNF Internet Culture

You have a very simple task in Friday Night Funkin FNF X Pibby vs Corrupted Ruv Mod to play when the Arrow Marks are coming from below, when the arrows are on the top arrow, then press the exact arrows.