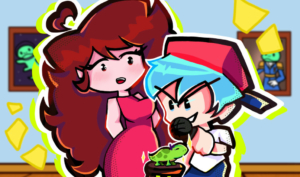 FNF Lizord is a Friday Night Funkin mod where the Boyfriend rap-battle with a cute pet Lizard named Lizord. You can also play FNF vs Icomongus and FNF Roblox Doors vs Rush – 1up Cartoon’s

The Keybaord Controls for FNF Friday Night Funkin vs Lizord Mod are WASD or Arrow Keys.