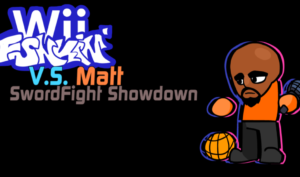 New opponents are waiting for you in this Friday Night Funkin Mod. In FNF vs Matt Wiik 4! (Fan-made) Mod, You’ll continue your journey of winning your Girlfriend’s heart. Convince your Girlfriend’s Dad by winning the rap battle against your opponents.

FNF Matt Wiik 4! is fan-made mod of Friday Night Funkin game where FNF vs Matt where the Matt is back and suited up for another rap battle with Boyfriend. You can Play FNF Matt wiik 4 mod online by clicking on the play link. You can also check out FNF vs Sonic.Exe and FNF: Scoptophobia. This Mod is also known as FNF Swordfight Showdown mod.

In the Swordfight Showdown of week 4, Matt turned in his bat and unsheathe his sword for battle with BF. The songs used in this mod is given below.

You have a very simple task in Friday Night Funkin FNF vs Matt Wiik 4! (Fan-made) Mod to play when the Arrow Marks are coming from below, when the arrows are on the top arrow, then press the exact arrows.

The Keybaord Controls for FNF FNF vs Matt Wiik 4! (Fan-made) Mod are WASD or Arrow Keys.