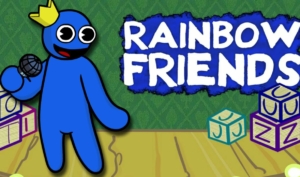 New opponents are waiting for you in this Friday Night Funkin Mod. In FNF vs Rainbow Friends Mod, You’ll continue your journey of winning your Girlfriend’s heart. Convince your Girlfriend’s Dad by winning the rap battle against your opponents.

FNF Rainbow Friends is a Friday Night Funkin Mod where the Boyfriend faces off with Blue, Green, and many more. Friday Night Funkin Rainbow Friends is a mod which is created by Mewza and is based on the Roblox horror game similar name to a rainbow friend, And it is a featuring the main 4 monsters of the game. Due to the game’s is increasing popularity, many fnf fans have created them on fanfics and own games based off of it. Now Rainbow Friends is currently one of the most played games on Roblox. The mod has also become popular due to its high-quality Graphics. Many players are comparing this game to Sonic fnf games. The Blue color chracter is battle with their Boyfriend. You can Play Rainbow Friends Online by clicning on play Button. You can also play this FNF Rainbow Unblocked.You can also play FNF I Hate You (Judas) and FNF Project MSG Rebirth

You have a very simple task in Friday Night Funkin FNF vs Rainbow Friends Mod to play when the Arrow Marks are coming from below, when the arrows are on the top arrow, then press the exact arrows.

The Keybaord Controls for FNF FNF vs Rainbow Friends Mod are WASD or Arrow Keys.