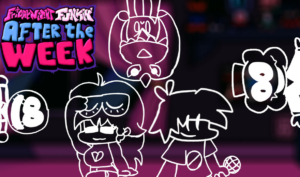 After The Week is a Friday Night Funkin Mod where after a long week of rap battle with everyone Boyfriend and Girlfriend retires for a slumber party with just two of them, but Pico and the Gangs shows up at midnight. You can also play FNF: Wednesday’s Infidelity vs Sad Mickey Mouse and FNF: Monday Night Monsterin’ vs My Singing Monsters

The Keybaord Controls for FNF Friday Night Funkin’ After The Week Mod are WASD or Arrow Keys.