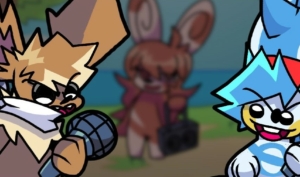 Friday Night Funkmon is a Friday Night Funkin mod where Boyfriend and Girlfriend turn into some flurry Pokemon creature and started a rap battle with other Pokemons. You can also play FNF Doki Doki DDTO Extras! and FNF vs Five Nights at Freddy’s 2